Colleen Cook, May 26, 1968 – July 8, 2019
A dear member of my Pagan and queer communities. Their dance with cancer was long and complex, and they danced it as fiercely as they could until the very end.
Requiescat in punk.

I get misgendered a lot. As an afab* person with an aesthetic I call “middle femme” (because it makes me sound like a lady Hobbit), most people who don’t know me identify me as a woman.

I know that this comes with vast privilege. Dominant culture’s ability to quickly and easily put me into one of the societally acceptable gender boxes, even if it’s not where I go, allows me a level of safety and ease that my more obviously gender-transgressing siblings, especially those who are also people of color and/or visibly disabled, do not share. Whenever I can, I use that privilege to speak and act in support of those who do not share it.

It’s also cranky-making, because it feeds into a dominant culture myth, unfortunately creeping its tendrils into the queer community, that nonbinary looks a certain way: rail-thin, flat-chested, and narrow-hipped (which my short, round, descended-from-Ashkenazi-Jews-and-Welsh-farmers body will never be), wearing “unisex” clothes, which often look suspiciously like men’s clothes with muted color palettes, no pockets, and high prices. In my heart of hearts I reject that myth, but by doing so, am I perpetuating my own invisibility?

I’m often caught on the horns of two equally strong, equally aggravating impulses. I want to shave exactly half my hair, replace exactly half my wardrobe with clothes from the men’s section, and be so aggressively uncategorizable that even I wouldn’t know what gender box to put me in if we met on the street, in order to be a visible support and sibling to other nonbinary/gnc folks. And I want to keep on as I have been, promoting my fierce belief that nonbinary identity is rooted first and foremost in gender experience and only secondarily in gender expression, and that I don’t have to change myself in radical, costly, and often unhealthy ways to conform to dominant culture’s fatphobic, androcentric, Ziggy-Stardust-wannabe stereotype of what nonbinary looks like.

It’s based on Janine Myska’s Aloha Vest crochet pattern, which I found on Ravelry. Everyone else I’ve seen has made it in a single color, but the pattern and means of construction make it well-suited to be crocheted in the colors of the agender flag: two stripes each of white, gray, and black around a central stripe of green. It took me forfreakingever, because I’m a slow and easily distracted crocheter, but I finally finished it this weekend.

Except that even here I messed up. The green yarn I had was much darker than I remembered it being: not the cheerful chartreuse of the agender flag, but a deep forest green the yarn company named “Dark Thyme” (man, I hear ya). Which means that my vest, which was meant to be both a bit of queer oomph for myself** and a subtle identifier for other agender folks, is instead just a stripey vest.

In a way, it is an awkward and all-too-fitting metaphor for my own gender identity. I, and those closest to me, recognize and honor me as an agender person. Everyone else sees a woman in a vest. That invisibility and misunderstanding hurts sometimes, but in the end, I know who I am, and maybe that’s all that matters.

*assigned female at birth, meaning that when I was plucked from my mother’s womb, somebody looked at my genitals and said, “Yup, that’s a girl.”
**all my crochet projects are also acts of magic, but that’s a post for another time.

This past weekend, Gadfly Theater Productions opened their latest show, I’m Never Going to Earth Again: 60 Queer Plays in 90 Queer Minutes. As the title implies, it’s a madcap night of one- and two-minute plays penned by a team of nine queer writers. One of which was me.

I have no words for what a delightful experience this show has been. From our earliest writers’ meeting to a dazzling opening night, watching the show come together has been magical in a way I’ve never entirely seen before. Having so much overlap between cast and writers has created a level of connection to the work and each other not often found in most “normal” theater productions.

And here’s what’s been the most precious to me: because all the writers are queer, no single one of us was expected to “represent the queer experience” (in six pages or less). We were all encouraged to write about what truly mattered to us, even if it didn’t appear, at first blush, to have anything to do with queer identity. We wrote about gods and strained family relations, about racism, classism, fatphobia, gentrification, religion, environmental degradation, coming out, breaking up, and being superheroes. Taken together, we all represented the queer experience.

And what an experience it is.

It’s playing at Strike Theater in northeast Minneapolis. You have four more chances to see it!

Today is Transgender Day of Remembrance. It’s the day when we lift up the memory of transfolk who have died due to anti-transgender violence and hatred.

First and foremost, we remember the ones who were flat-out murdered for simply being who they were. These losses hurt enough, but there are others, as well.

The ones who died from perfectly curable, or at least treatable, conditions because they couldn’t access competent and compassionate medical care.

The ones who died on the streets because some parents would rather throw their own child out of the house than try to understand.

The ones who took their own lives because living in a world that could be so cruel to them simply for existing felt like too heavy a burden to bear.

We honor the memory of all we have lost, whether we know their names or not. What is remembered, lives.

I also want today to remember the transfolk who were simply… erased. Who lived and died in the shadows, who could only survive by erasing this part of themselves.

The ones who never had a single space where it was safe to express their experienced gender.

The ones who never knew there was a name for their experience, or anyone else who felt the same.

We honor the memory of all we have forgotten, all who were hidden from us. What is remembered, lives. 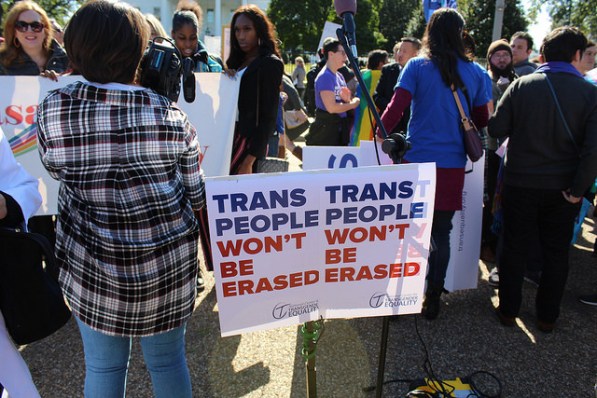 I am capable of holding paradox. I value seeking the third way. Collaboration over compromise. Both/and rather than either/or. Normally, the “yes, and” is a very good thing. Today, it’s kind of depressing.